America: we are paranoid, underfunded, overpopulated, our southern border states tend to be a bit xenophobic, and we are xenophobically paranoid about overpopulation. What to do … what to do? Turn boy scouts into border patrol. 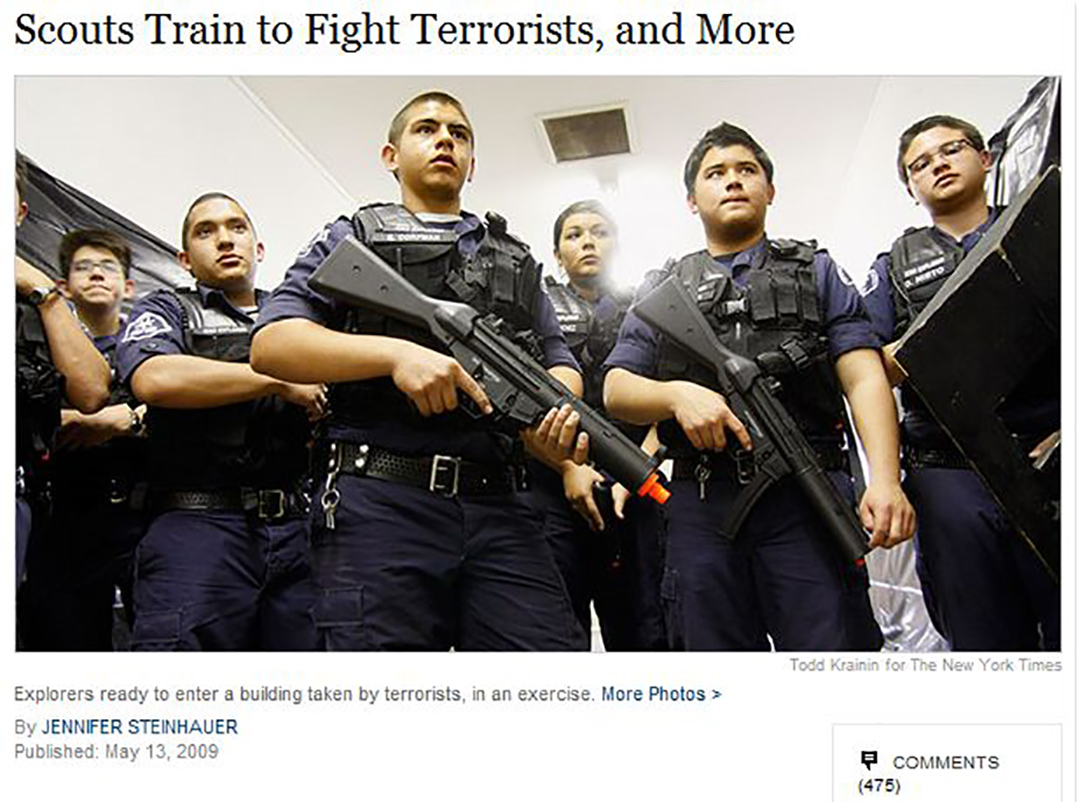 How did we get so paranoid, to the point where we breed children for battle, you ask.

Oh right, when we couldn’t find the guy responsible for 9/11 we averted attention to a close-enough-to-count desert country. Then — per usual socio-biological theory — we knocked off the head; per usual socio-biological reality, it didn’t work and the body got bigger. Being America though, we’re still in Iraq. Unfortunately, we as a country have a bad track record battling guerrilla warfare — especially in wars we started: Tet Offensive … maybe?

In a perfect world we would love to save children — from the evils of gangster rap music and violent “shoot ‘em up” video games; but we live in a crazy world, where the next best thing to saving the children, is sacrificing them for the greater good …

“Plus, look how much more fun this is than a video game — it’s like you’re really dead. *high five* Awesome! Thanks Boy Scouts of America! These are life skills I can really use — on the River Styx, perhaps …”

At the end of the day is the juice worth the squeeze? Is the ephemeral “terrorism” — the concept that is becoming increasingly concrete, the modern concept we largely created — worth the sacrifice? Apparently so, apparently it is necessary to achieve that Golden Age where we live in a safe and sterile country of which we can be proud. An age where we boast the brightest young minds ready to forge a new path of innovation and progress, where in between bouts of laughter you hear kids say:

A country of border patrolling boy scouts, who love our country almost as much as they love war itself. This is what America needs to solidify its continued role as world power; like Spain, or Rome, or that other country with kid soldiers born to battle:

Watch this space: From building campfires to fighting Narco Infernos next door, the Boy Scouts of America and your government ensure the safety of you, and all Americans — at your own expense. The “Greatest Generation” was great to many because they patriotically took up arms when the world required it. Our generation’s greatness will be gauged on our ability to avoid that same fate.